The World Health Organization (WHO) has recorded a record one-day rise in the number of new coronavirus infections, with 307,930 reported over 24 hours.

The biggest increases in infections were reported in India, the US and Brazil.

Worldwide there have been more than 28 million confirmed cases, half of which have been in the Americas.

The previous one-day record for new cases was on 6 September when the WHO reported 306,857 new infections.

Where are cases rising most steeply?

More than 1,000 new deaths were recorded in the US and India while Brazil said 874 people had died from Covid-19 related illness in the past 24 hours.

India has the second largest number of confirmed cases in the world, behind the US. Last week it reported nearly two million Covid-19 cases in August, the highest monthly tally in the world since the pandemic began. 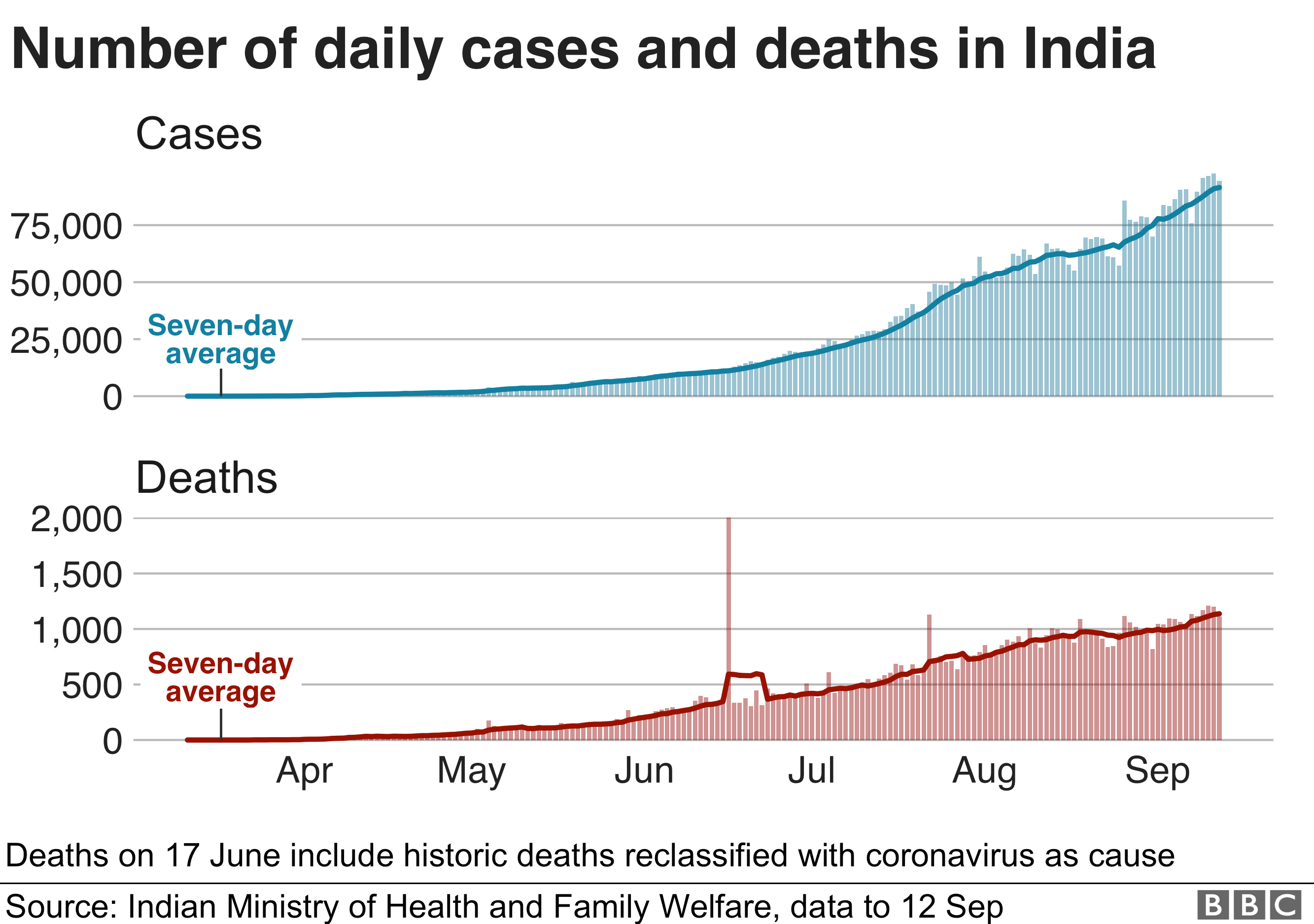 The country saw an average of 64,000 cases per day – an 84% hike from average daily cases in July, according to official data. The death toll has topped 1,000 every day since the beginning of September.

Brazil has recorded more than four million cases, the third highest in the world. It has the highest number of deaths in Latin America, with about 131,000 so far.

The US has recorded almost a quarter of the world’s total number of coronavirus cases – more than six million. It saw an increase in the number of daily cases in July, but the numbers have fallen since then.

The US has the world’s highest recorded death toll from Covid-19, with more than 194,000 fatalities.

Countries across Europe are recording a rising number of daily cases amid fears of a resurgence of the virus.

Local lockdowns have been imposed in the worst-affected regions, and there have been renewed appeals for people to wear face coverings and follow social distancing rules.

Other countries that have seen a resurgence of the virus include Peru, Israel, South Korea and Australia.

On Sunday, police in the Australian state of Victoria arrested more than 70 protesters for flouting stay-at-home orders. About 250 people had attended the protest in the city of Melbourne, which was promoted by social media groups sharing conspiracy theories about the pandemic.

Victoria has been the epicentre of Australia’s outbreak, accounting for 75% of cases and 90% of deaths.

Neighbouring New Zealand is to lift coronavirus restrictions – apart from in the largest city of Auckland – on 21 September, Prime Minister Jacinda Ardern announced on Monday.

The country has had great success containing coronavirus but restrictions were imposed on Auckland last month after a number of new infections were identified.

Israel, meanwhile, is to impose a new nationwide lockdown as coronavirus cases there continue to rise. Tough restrictions will come into effect on Friday – Jewish new year – and will last at least three weeks, authorities said.

Israel has seen more than 153,000 confirmed infections and 1,108 deaths from Covid-19, according to a tally by Johns Hopkins University.