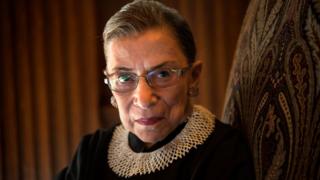 News of Supreme Court Justice Ruth Bader Ginsburg’s surgery to remove cancerous growths from her lung rattled Washington as the city prepared for the holidays this week. Why do her health concerns send Americans into a tizzy?

On Friday, the high court announced that Justice Ginsburg underwent surgery after malignant nodules were discovered during a hospital visit earlier this year after she suffered fractured ribs in a fall. The reaction from the liberal corners of social media was an instantaneous mixture of well-wishes and barely-suppressed horror.

“All I want for Christmas is a healthy RBG,” wrote film director Jennifer Siebel Newsom.

Others were grateful that doctors discovered the cancerous growths in November, when Justice Ginsburg took a spill in her chambers at the US Supreme Court and fractured three ribs.

“If RBG didn’t fall and break her ribs they may never have found these cancerous nodules in her lungs,” another Twitter user wrote. “Sometimes even bad things work out for the best.”

After her fall last month, late night television host Jimmy Kimmel introduced the “Ruth Bader Gins-bubble” on his programme, saying the 85 year old needed to be “protected at all costs” as a Ginsburg stand-in rolled on stage encased in a gigantic plastic bubble.

Anxiety surrounding the health of the oldest sitting justice is a constant in liberal America. If she were to retire or become too ill to serve, President Donald Trump would be able to cement the court’s conservative majority with the appointment of his third justice, after Neil Gorsuch and Brett Kavanaugh.

Beyond that, the outpouring of concern can be credited to the fact that for liberals, Justice Ginsburg has become a bona fide icon. She’s the subject of a new biopic On the Basis of Sex, a documentary, and a bestselling book called Notorious RBG, which re-introduced her to a generation of millennial women. It’s now possible to purchase T-shirts and coffee mugs with her likeness on them.

“I think people of all ages are excited to see a woman in public life who has shown that, even at the age of 85, she can be unflinching in her commitment to equality and justice,” says Irin Carmon, one of the co-authors of Notorious RBG. “We don’t have enough figures like her.”

Famous for her diminutive stature, serious demeanour and long pauses – she is said to have no tolerance for small talk – how did Ms Ginsburg go from celebrated legal scholar to full-blown celebrity?

A pay cut for being pregnant

Joan Ruth Bader was born in the Flatbush neighbourhood of Brooklyn, New York, in 1933, the daughter of Jewish immigrants. At the age of 17, she lost her mother to cancer.

After graduating from Cornell University in 1954, she married Marty Ginsburg and not long after the couple had their first child. While Ms Ginsburg was pregnant, she was demoted at her job at a social security office – discrimination against pregnant women was still legal in the 1950s. The experience led her to conceal her second pregnancy years later.

In 1956, she became one of nine women to enrol at Harvard Law School, where the dean famously compelled his female students to tell him how they could justify taking the spot of a man in his school. She later transferred to Columbia Law School in New York, and became the first woman to work at both schools’ law reviews.

Despite that, Ms Ginsburg struggled to find work, even though she’d been at the top of her class.

“Not a law firm in the entire city of New York would employ me,” she once said. “I struck out on three grounds: I was Jewish, a woman and a mother.”

She became a professor at Rutgers Law School in 1963, where she taught some of the first women and law classes, and co-founded the Women’s Rights Project at the American Civil Liberties Union (ACLU). In 1973, she became the ACLU’s general counsel, which kicked off a prolific era of arguing gender discrimination cases, six of which brought her before the US Supreme Court.

She argued on behalf of a female Air Force lieutenant who was denied a housing benefit for her husband that her male colleagues received for their wives. She also took men’s cases. In 1975, she argued the case of a young widower who was denied benefits after his wife died in childbirth.

“His case was a the perfect example of how gender-based discrimination hurts everyone,” Ms Ginsburg said years later at her confirmation hearing.

She won five out of the six cases she argued before the Supreme Court, a time when she says she felt she had to explain gender discrimination to the all-male justices like “a kindergarten teacher”.

It was also during this time that she argued on behalf of a female Air Force captain who’d become pregnant and was being told to abort the baby or lose her job. Ms Ginsburg hoped that the case would make reproductive autonomy a constitutionally protected right, but instead the Air Force changed its policy and the case was dismissed.

The next year, Roe v Wade decided the question of abortion, and Ms Ginsburg fretted that since the decision hinged on right to privacy instead of equal protection, it was open to legal attack.

“The court ventured too far in the change it ordered and presented an incomplete justification for its action,” she said in a 1984 lecture.

Second woman on the Supreme Court

In 1980, as a part of President Jimmy Carter’s efforts to diversify the nation’s federal courts, Ms Ginsburg was nominated to the United States Court of Appeals for the District of Columbia. She gained a reputation as a centrist, voting with conservatives many times and against, for example, hearing the discrimination case of a sailor who said he’d been discharged from the Navy for being gay.

President Bill Clinton nominated her to the Supreme Court in 1993, after a protracted search process in which some feminist groups, according to the New Yorker, spoke privately against her over her past remarks on Roe. But Mr Clinton eventually made up his mind, making Ms Ginsburg the second woman ever nominated to the US Supreme Court.

“It was her interview that did it,” Mr Clinton says in the 2018 documentary RBG. “Literally within 15 minutes, I decided I was gonna name her.”

“It is essential to woman’s equality with man that she be the decision-maker,” she said in the hearing before Congress. “If you impose restraints that impede her choice, you are disadvantaging her because of her sex.”

One of her most important, early cases on the Supreme Court was United States v Virginia, which struck down the men-only admission policy at Virginia Military Institute. Writing for the majority, Justice Ginsburg said that no law or policy should deny women “full citizenship stature – equal opportunity to aspire, achieve, participate in and contribute to society based on their individual talents and capacities”.

“It really was the last step in her own trajectory as a lawyer in trying to get the Supreme Court to recognise that gender classifications are a violation of the Equal Protection Clause of the 14th Amendment,” says Paul Schiff Berman, professor of law at George Washington University and one of Ms Ginsburg’s law clerks in the late 1990s.

Over the decades, as the court has become more conservative, Justice Ginsburg has increasingly moved to the left, and is now famous for her fiery dissents.

In the case of Shelby County v Holder, the court struck down a portion of the Voting Rights Act of 1965 by a 5-to-4 vote, eliminating federal preclearance for changes to local voting laws – a provision intended to prevent voter suppression.

In response to the majority’s assertion that America had changed so much for the better that the preclearance was no longer needed, Justice Ginsburg wrote in her dissent that this was “like throwing away your umbrella in a rainstorm because you are not getting wet”.

From justice to icon

In part thanks to her unsparing dissents, a young law student named Shana Knizhnik created a Tumblr account dedicated to Justice Ginsburg called Notorious RBG – a reference to the late rapper The Notorious BIG. The account introduced Ms Ginsburg to a new generation of young feminists, and became so popular that Ms Knizhnik and her co-author Ms Carmon turned the blog into a book of the same name, which became a bestseller.

Notorious RBG helped propel Justice Ginsburg into pop culture stardom. Actress Kate McKinnon began playing Ginsburg on Saturday Night Live. The justice herself is said to distribute T-shirts with her own likeness on them.

“I think that it’s actually something that Justice Ginsburg has really enjoyed in these last few years,” says Mr Berman, her former clerk. “For her to feel as if her legacy can inspire a new generation of young women in particular, I think, is very exciting to her.”

As a part of her new pop culture relevance, all aspects of Justice Ginsburg’s life have become the subject of internet fascination – her workout routine, for example, has been attempted by comedian Stephen Colbert. She’s been lauded as a fashion icon, from her penchant for lace gloves to her elaborate jabots, the collars she wears over her robes. Her famous “dissent collar” has been reproduced in miniature for necklaces.

Her marriage to Marty Ginsburg – who died in 2010 – is central to the new biopic, On the Basis of Sex. During the course of their 56-year marriage, he became his wife’s greatest advocate, happy to play second fiddle to his famous partner.

“Meeting Marty was by far the most fortunate thing that ever happened to me,” Justice Ginsburg says in the documentary RBG.

She is a famously stoic woman, but she adores the opera, a passion she shared with the late conservative Justice Antonin Scalia who, despite being her ideological opposite, was a close friend in the years before his death in 2016.

“I get totally carried away,” she says of opera in the documentary. “It’s like an electric current going through me.”

But the justice is not immune from criticism – or from error. During the 2016 election, she called then-candidate Donald Trump a “faker” and said she could not imagine a world with him as president.

“He says whatever comes into his head at the moment. He really has an ego,” she told CNN.

Afterwards she was criticised by both the right and left, who said her comments could undermine her impartiality and the authority of the court. She ultimately apologised.

Why she refuses to retire

During President Barack Obama’s two terms in office, some liberal pundits wondered loudly if it wasn’t time for Justice Ginsburg to retire, with a Democrat in office who could be relied upon to install another liberal justice. She has dismissed such questions with some irritation.

“Many people have asked me: ‘Well, when are you going to step down?'” she said in an interview. “As long as I can do the job full steam, I will be here.”

Ms Carmon is quick to point out that this is not the first time Justice Ginsburg has been ill – while she has broken her ribs before, survived two previous battles with cancer and had a stent placed in her heart in 2014, she has never missed a day of arguments.

“Each time she’s returned with just as much determination and resilience,” says Ms Carmon. “She has been at this work for at least a half-century, and she’s not done yet.”