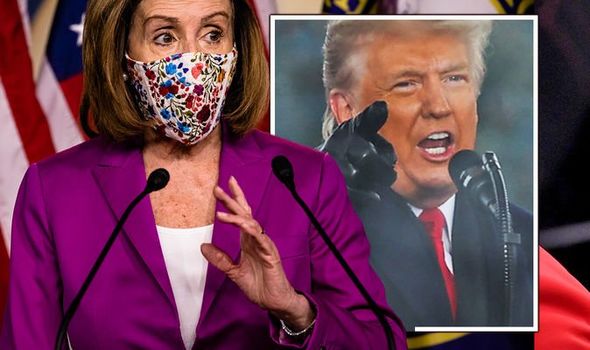 In a letter to Housen Democrats, Ms Pelosi said: “This morning, I spoke to the Chairman of the Joint Chiefs of Staff Mark Milley to discuss available precautions for preventing an unstable president from initiating military hostilities or accessing the launch codes and ordering a nuclear strike.

“The situation of this unhinged President could not be more dangerous, and we must do everything that we can to protect the American people from his unbalanced assault on our country and our democracy.”

The letter came just before Ms Pelosi was to join a telephone conference to discuss their options for impeaching the outgoing President.

Earlier this week, violent and deadly riots broke out in Capitol Hill, carried out by Trump supporters.

Five people have been killed so far after Mr Trump protested against his election defeat and urged supporters to “fight” to overturn the results.

Ms Pelosi said: “As you know, there is growing momentum around the invocation of the 25th Amendment, which would allow the Vice President and a majority of the Cabinet to remove the President for his incitement of insurrection and the danger he still poses.

“Yesterday, Leader Schumer and I placed a call with Vice President Pence, and we still hope to hear from him as soon as possible with a positive answer as to whether he and the Cabinet will honour their oath to the Constitution and the American people.

“Nearly fifty years ago, after years of enabling their rogue President, Republicans in Congress finally told President Nixon that it was time to go.

“Today, following the President’s dangerous and seditious acts, Republicans in Congress need to follow that example and call on Trump to depart his office – immediately.

“If the President does not leave office imminently and willingly, the Congress will proceed with our action.”

President-elect Joe Biden is set to be inaugurated on January 20, which Mr Trump has already refused to attend.

But fears the Republican could declare war were perviously raised following his brutal election defeat.

In November, reports said Mr Trump was set on making Iran pay as steep a price as possible before leaving the White House.

Brigadier General Hossein Dehqan said at the time: “We don’t welcome a crisis.

“We are not after starting a war.

“A limited, tactics; conflict can turn into a full-fledged war.

“Definitely, the United States, the region and the world cannot stand such a comprehensive crisis.”

This warning came amid growing tensions between Washington and Tehran which almost escalated to war this time last year.

Today, Chair of the Defence Select Committee Tobias Ellwood also warned Mr Trump will “go out with a bang”.

He said: “The fact that he is failing to share information – as he is duty-bound to do – suggests he has something up his sleeve and he is going to go out with a bang.

“Whether that’s connected with some formal intervention in Iran, or something else, that’s difficult to know.

“But there is enough nervousness in Washington that former defence secretaries on both sides of the aisle have collectively called it out.

“The military should not be used in any manner – whether that’s domestically to stop Trump from leaving the building, or pursuing a last-ditch foreign policy which could be problematic for the incoming administration.”