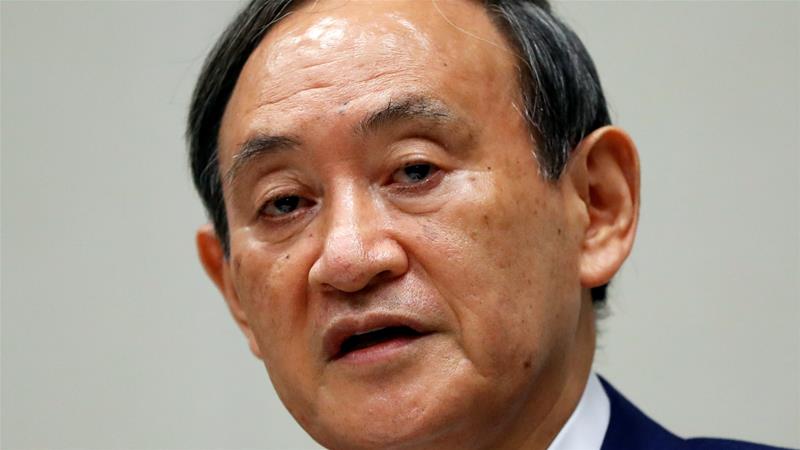 Yoshihide Suga, Japan’s chief cabinet secretary, has announced he will join the race to succeed Prime Minister Shinzo Abe as head of the ruling Liberal Democratic Party (LDP) – and, by default, the country’s next head of government.

A longtime aide to the outgoing prime minister, Suga told reporters on Wednesday that he was entering the leadership contest to avoid a political vacuum in a time of crisis.

The party’s leader is set to take over as prime minister, given the LDP’s majority in the lower house of parliament. Abe announced his decision to resign last week, citing poor health.

Suga, 71, said his decision came “after some deep thought on what I can do as a politician and a member of Abe’s administration”.

His main competitors in the September 14 party vote are a former defence minister, Shigeru Ishiba, and a former foreign minister, Fumio Kishida. There are no female contenders in the race, the winner of which will finish the rest of Abe’s term, until September 2021.

The party decided on Tuesday to hold a scaled-back leadership vote that will not include rank-and-file members. Instead, only its legislators and three representatives from each of the country’s 47 prefectures will vote – an advantage for Suga, who is backed by five of the LDP’s seven factions, according to local media.

Ishiba, 63, is not seen as popular among LDP legislators due to his anti-Abe stance, but he is a favourite in public opinion polls.

Kishida, also 63, was in the past considered Abe’s favoured successor. But the prime minister has said he will not endorse a candidate, and Kishida’s limited public profile is likely to leave him struggling to challenge Suga.

Many party chapters will poll rank-and-file members to decide how to allocate their three votes, but experts say this is unlikely to change the momentum growing for Suga if the members of the five factions back him.

His selection “is increasingly assured, as the LDP’s factions – with the exception of the factions headed by rival candidates Shigeru Ishiba and Fumio Kishida – have lined up behind Suga”, Tobias Harris, a Japan expert at Teneo consultancy, said in a note.

In his news conference, Suga said he would “maintain and push forward” the reflationary “Abenomics” stimulus policies pursued by the outgoing prime minister.

The son of a strawberry grower in the northern prefecture of Akita, Suga is a self-made politician, a rarity in Japan’s largely hereditary business of politics. He earned his own tuition while working several part-time jobs to graduate from a university in Tokyo. He entered politics as secretary to a legislator for 11 years and served as a city assemblyman for nearly nine years before he was elected to parliament in 1994.

As Japan’s longest-serving chief cabinet secretary, Suga is a policy coordinator and adviser to Abe – the point man behind the centralised power of the Prime Minister’s Office that influences bureaucrats to implement policies. Suga has been a loyal supporter of Abe since his first stint as prime minister from 2006 to 2007, which ended abruptly because of Abe’s chronic illness, and helped him return to power in 2012.

He has earned a reputation for his matter-of-fact twice-daily televised media briefings and has become known as “Uncle Reiwa” after he was tasked with unveiling the new imperial era name for Emperor Naruhito last year.

Asked about key policies that a post-Abe government should tackle, Suga identified coronavirus measures as the biggest challenge. In addition, the Japan-US security alliance – developed through the friendship between Abe and US President Donald Trump – “needs to be further deepened” within the limitations of Japan’s pacifist constitution, he said.

The two other contenders, Kishida and Ishiba, say the prime minister’s policies tended to ignore the voices of the people and that they intend to address the economic and social divisions that had widened under Abe. Neither man has proposed any major changes in Japan’s security and diplomatic policies.

Abe’s successor will also have to grapple with the Tokyo Olympics, which have been postponed to next summer, setting Japan’s security policy in the face of an increasingly assertive China, and the outcome of the presidential election in the US, Japan’s key ally.