The Ukrainian President insisted that the attack in the central city of Kremenchuk was deliberate rather than a mistake. Mr Zelensky blasted the perpetrators arguing that they “should have no place on Earth”.

The former comedian had earlier stated that 1,000 people had been inside the shopping centre at the time of the attack.

Writing on his Telegram messaging app, Mr Zelensky said “fortunately” many people had been able to escape.

He said: “The mall is on fire, firefighters are trying to extinguish the fire, the number of victims is impossible to imagine.

“Fortunately, as far as we know now, many people managed to get out [before the strike], they were assisted out [after the air raid siren]. 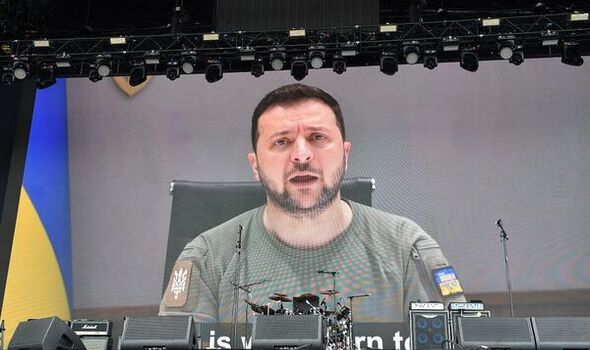 “But there were still people inside when it hit: employees and some visitors.

“Russia continues to take out its impotence on ordinary civilians.

“It is useless to hope for decency and humanity on its part.”

Dmytro Lunin, the governor of the Poltava region, argued there was no military target nearby which Russia could have been aiming at.

Mr Lunin said at least 15 people had been killed and 40 injured by the two missiles.

The local mayor Vitaliy Meletskiy said the “very crowded” shopping centre had no links to the armed forces.

Video footage from inside the centre filmed just after the attack shows people running through debris in panic.

One person can be heard shouting “is there anyone there?”, while another called for his mother.

According to Kyrylo Tymoshenko, the deputy head of the Ukrainian presidential office, a rescue effort was under way and nine of the wounded were in a serious condition.

In a statement, the G7 leaders meeting in Munich described the attack as “abominable.”

“Russian President Putin and those responsible will be held to account.

“We will not rest until Russia ends its cruel and senseless war on Ukraine.”